I'm so proud of my little one.  She won first place in her grade level at her elementary school's science fair.  The judging was done by independent people outside of the school so the judging would be fair and unbaised.  It's funny because she wasn't expecting to win.  She did her project simply for fun.  She wanted to know how many licks does it take to get to the tootsie roll center of a tootsie pop.  :)  Yep, you remember that commercial, right?  After doing the experiment, we discovered it took on average 426 licks.  If I had to eat another tootsie roll pop, I would have gotten sick!

A picture of her, her project, and her medal that she is extremely proud to show off. 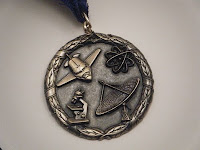 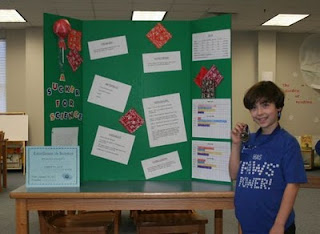 Posted by FrancineB at 8:14 PM

Your click funds food and care for rescued animals